The year 2020 will go down in history as one of the most chaotic and troubled since WWII. The coming year, 2021, stands out equally intense, but for different reasons.

I was in India in November 2019 when I wrote my 2020 forecast, “The Year Atlas Stumbled.” 2020 is ruled by the 4, a grounded, stable number representing the foundation of our existence.

Unfortunately, the numbers surrounding it were quite ominous, revealing it would shake the foundation of our world rather than strengthen it. As we now know, it did.

Today, I am in rural Texas contemplating the numbers associated with 2021, a 5 Universal year – in many ways the direct opposite of the 4. The 5 is dynamic, representing freedom, courage, unexpected events, and rapid changes. But once again, the surrounding numbers put a spin on it, offering a vastly different picture from the usual 5 year.

It will be a year of change and unnerving ups and downs, but where 2020 left us damaged and anxious, we will find ourselves in a more positive and promising place by this time next year.

2021 will be the first of a five-year period that slowly turns humanity in a different direction – away from the abyss, towards a future of potential and healing. Unfortunately, the increasing polarization of humanity we see today will not abate. On the contrary, the forces that prefer to stay the course toward self-annihilation will become even more stubborn and confrontational.

We are in a tug of war struggling for control of the wheel – fear versus faith, apathy versus hope, greed versus fairness, selfishness versus generosity, ignorance versus awareness. There are few grey areas, few overlapping interests. It is quite literally a final and decisive fight. This may sound dramatic, but it accurately reflects the time we live in – a time that feels extreme and critical on many levels. Let’s step back a minute to widen our view and perspective.

The End of the Beginning

Evolution is the gradual process of life forms adjusting to a changing environment. The key word here is gradual. Life appeared on this planet four billion years ago. Homo sapiens showed up about three hundred thousand years ago, and it took over two hundred thousand years before we invented basic tools like the axe or fishing rod. Fast forward another hundred and eighty thousand years – give or take a few millennia – when we created more complex tools, such as the wheelbarrow and sailboat.

Once we got to that point, things began moving more rapidly. The industrial revolution started 300 years ago, cars and airplanes have been around for a little over a 100 yeas, desktop computers came out fifty years ago, and today we carry smart phones more powerful than mainframe computers from the 80’s. The next 5 years will be an even greater leap in science, technology, and our thinking.

To put it into perspective, imagine that to build a house, it took four thousand generations just to rake, shovel, and flatten the ground to build it on. But the last generation needed only three weeks to lay the foundation, 30 minutes to build the house, and 4 seconds to invent and build the appliances.

At the same time, the human race experienced a burst of growth, as this image illustrates. 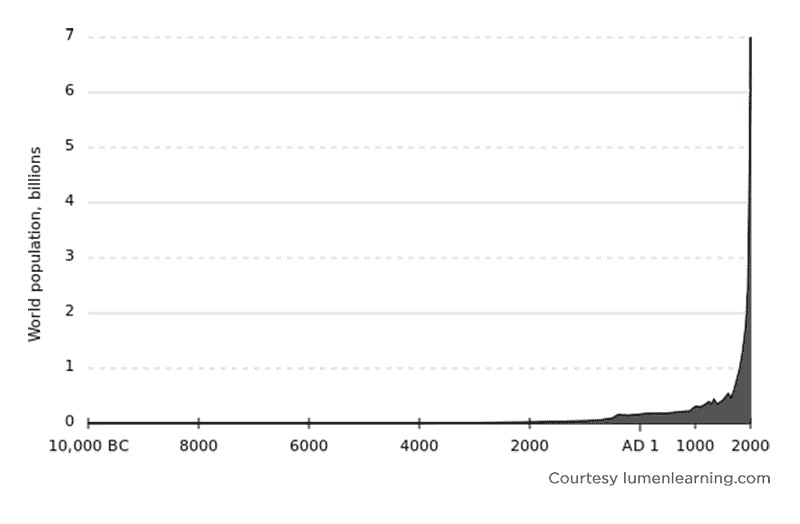 In the last two hundred years the world population has multiplied by eight, while wildlife and their natural habitats have been reduced by about 70%.

This is a climactic time. Four billion years went by laying a slow-burning detonating cord that finally reached the dynamite, causing an explosion of human growth, innovation, and technology. But along with it, came destruction and devastation. The only reason we are not fully aware of the magnitude of this moment in time, is because we are the fragments in the explosion – not the observer.

Where we are now

Our governments, institutions, and economic powerhouses appear to be moving in the same direction, consuming everything in their path. We are all part of that rapid destruction – tiny cogs, lost in a humongous apparatus that is never satisfied. Some of us are content, well-fed, and comfortable. Others are cold and hungry and desperate, while the machine keeps getting bigger, consuming more and more of our planet – and us. It seems almost impossible to escape the inevitable, a final count-down where we have exhausted our resources and there is nothing left. But that is about to change.

This graph shows the numbers associated with 2021. The blue 5 represents the sum of the digits 2, 0, 2, and 1. It is called the Universal Year number. The green numbers reflect generally favorable influences that indicate growth – found by adding the single digits in 2021. Numbers in red show the challenging counterforces that will be obstacles on the path. They are found by deducting one digit from the other.

The 5 is the dominant number, but the others have an effect as well. Of those, the two most strongly felt are the 9 at the top and the 1 at the bottom.

What the 5 tells us.

Change is at the core of 2021. If you feel the same could be said about 2020 you are correct, but the effect will be quite different. In 2020, change was forced upon us because the foundation of our world was jolted not unlike an earthquake. The best we could do was scramble to save as much of what is dear to us as possible. While there will still be plenty of turmoil in 2021, we adapt and begin to change direction.

Imagine 2020 as a huge ship caught in a hurricane. It has lost control of its engines and steering, barely staying afloat. In 2021 we regain control, and while the storm still rages, we slowly move toward safety and calmer waters.

What the 9 at the top means

All numbers have a front and a back, and no one number is better than another. It is the location of the number that tells us whether we will experience mostly its negative or positive qualities. The 9 at the top means that its positive attributes will be strongly felt.

The 9 is the most humanitarian and sacrificing of all numbers. It represents global awareness and oneness. It is the healer of humanity, the synthesizer, helping us relate to and identify with others – not just those close by, like family and friends, but also strangers on the other side of the globe. The 9 has empathy and compassion for people at large, it is selfless and devoted to the betterment of all. It is not often found at the top of a pyramid, but when it is, it is full of promise.

The 9 will motivate us throughout 2021 on a subtle but deep and powerful level. It is the driving force behind the dynamic 5, steering us towards our higher ideals. The 9 brings hope and optimism – it is the reason we won’t just move forward but also change direction.

What the 1 at the bottom tells us

When we find a 1 at the bottom of the chart, the negative qualities of that number will be the most powerful force we have to conquer.

The negative attributes of a 1 are difficult to counter with anything other than brute force, as it is selfish, confrontational, aggressive, and lacks the ability to identify with anyone outside its closest circle. The 1 is stubborn and unwilling to compromise. It is a lonely number whose positive qualities – independence, individuality, courage, and loyalty – are subdued when found in this location, while its negative traits thrive.

The positive attributes of the numbers in green support the 9, while the red’s negative attributes support the 1. The influence of supporting numbers is subtle, so I won’t go in depth to describe each one. The interesting point here is that both the 9 and the 1 are supported by the 2. This offers a good example of how positive and negative traits can be expressed.

We also find multiple 1’s, stacked, supporting the 1 at the bottom. This particularly worrisome arrangement tells us it is impossible to overestimate the fierce, unrelenting power of the 1. The struggle between the 1 and the 9 will be breathtaking and reflected in violent confrontations.

How all this will play out

Despite the struggle conveyed above, 2021 will initiate a continuous progressive curve toward a more humane world. Addressing climate change, equality, and expanding political alliances are all possible, but they will take place against a background of natural disasters, violence, extremism, and destruction. Polarization will become even more profound as the firestorm of misinformation continues to burn.

The smoke from many small fires may obscure our ability to recognize the momentum toward a growing sense of brother/sisterhood (globally and within our communities), but take heart, that is perhaps the most important promise of 2021 and the next five years.

Reality plays on different levels. On the surface are the events and changing circumstances that define the visible, material side of our world. Just below that, obscured by the shadows of the material world, are the forces and undercurrents that shape it – evolving awareness carried on waves of spiritual realizations and a sense of oneness.

There will be days when all we can see is chaos in the world around us. Others when we have reason to hope, with a clear sense we are moving in the right direction.

2021 will be a year of spectacular events and changes, in many ways not that different from 2020. But the deeper reality is that we are evolving quickly, gaining control, changing direction, and moving forward in constructive ways we have yet to see clearly. It won’t come in a day, and it won’t be easy, but the numbers predict a significate leap forward and in the right direction over the next five years.

2021 is the first of five pivotal years. If we are still around a thousand years from now, people will look back at 2021 as the year we changed history and began our journey to recovery.

Find out what 2021 has in store for you personally based on your unique numbers.

Are we friends on social media, yet? Use the buttons below to connect, then sign up for our Newsletter below.
Facebook-f Instagram
Courses / workshops / meditations

Please email us and we will add you to our list! Courses and Workshops will be posted on www.soulfulways.co.za